Come and join our friendly band of players, contact the group leader above if you wish to find out more.

Petanque is a sport where players or teams play their boules/balls towards a target ball. 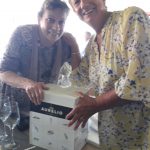 On Friday 21st the Thursday Petanque group had their annual lunch at the restaurant Attico in the port. It was a fun afternoon enjoyed by all. We especially gave thanks to Pam Coombe, who for many years has run the group until last September when…