The Meeting is in two parts, between 9:30 and 10:50 members can socialise with each other, meet the Committee and Group Leaders, as well as visit the desks for Travel, Membership, Book Swap, DVD Swap and others.

The formal part of the meeting starts promptly at 11:00 and lasts for about 15 minutes and is followed by a speaker. All U3A Jávea members are welcome and encouraged to attend. Please note that these meetings are restricted to members only.

2. Approval of Minutes of last Meeting

11. Introduction of Guest Speaker and Presentation 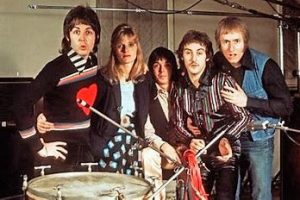 Geoff Britton ex-drummer for a number of famous rock and roll/pop bands including Wings will give an interesting talk about his career playing for top bands.  Geoff has asked us to post the following brief biography about himself:

To the good people of the U3A, as I am going to be talking to you at the end of February, I thought it polite and proper that you should know something about me. So without giving too much away, whilst hopefully titivating your interest, I thought I would tell you a little bit about me. I was born in London during the blitz, I was privately educated and I was expected and groomed to run and take over the family business. However, being a rebel with a cause after seeing Gene Krupa play the drums, my life took a different course much to the chagrin of my father.

From the early 60’s onward and up to the present day, I have been a working drummer.  I started at the bottom and along the way I have worked on radio, TV, film, recordings, and toured throughout the world. For me one of my greatest personal memories is sitting with my Mum and Dad and my girlfriend Magpie, watching the recording of the show on TV of myself playing on The Royal Variety Show in front of Her Majesty The Queen in 1981.

As I am coming to talk to you about my career in music, I don’t want to give too much away. However to whet the appetite of those who don’t know me, the biggest name band of which I was a member was Wings with Sir Paul McCartney.

During the course of my talk, if you have any questions please just ask. I am looking forward to seeing you and would like to thank Peter Allin for his help in arranging it.

See you all on 26th February.

Find out more or adjust your settings.