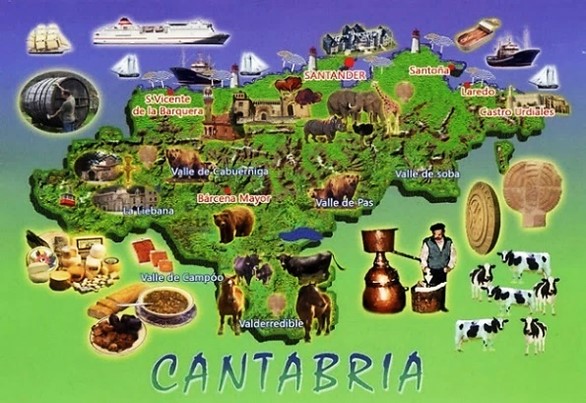 Escape the heat of the Costas and the crowds! Saturday 20th – Wednesday 31st August 2022

An 11-night tour to the cooler northern region of Cantabria, with the opportunity either to relax or to join in the excursions offered to nearby places of interest. Cantabria offers a trip full of beautiful scenery, excellent gastronomy and unique heritage. This northern part of Spain is home to various prehistoric caves, of which the most famous of all is Altamira, awarded the World Heritage designation and known as the “Sistine Chapel of Prehistoric Art”. Cantabria’s towns and villages contain a wealth of beautiful monuments such as the Magdalena Palace in Santander, the monastery of Santo Toribio de Liébana and Gaudí’s “Capricho” monument in Comillas.

We will be staying in three historic Paradores and also five nights in the Hotel Termas de Liérganes.

Sitting at the foot of two hills, Liérganes is not only listed as one of Cantabria’s prettiest villages but since 1978, it has also been declared to be of National Historic-Artistic Interest; its streets are lined with classic examples of architecture from the 17th and 18th centuries, all perfectly preserved and maintained.

A highlight of the trip may possibly be the “Battle of the Flowers”, a special festival of national interest which has been held in Laredo for over 100 years.

Of all the beautiful villages in Cantabria, Laredo is the one with the largest marina. It is a fishing village with a spectacular landscape that is composed of the Treto estuary and the bay of Santoña. But in addition to its privileged nature, it also has an artistic and historical complex of great value. On the evening of La Batalla de Flores de Laredo the streets of Laredo will be filled with an abundance of fresh flowers. The high point of the celebration comes at about 17.30 hrs when the parade of floats adorned with fresh flowers sets off through the streets. In addition to the parade there are also a range of street markets and musical performances, until finally the jury chooses the best float of the year, after which the festivities continue until nightfall.

If you would like to join this tour (maximum 40 members) please email group leaders Angela & Tony:

Please see the PDF document below for the detailed itinerary.

Christmas Party in the Parador!

An evening excursion to see the flamenco dancer, Karime Amaya, at the Teatre Talia in Valencia